Key Differences Between a Windows Server and a Windows Desktop

2. Windows Server Uses CPUs More Efficiently
In general, a server OS is more efficient at using its hardware than a desktop OS, especially a CPU; therefore, if you install Alike on a server OS, you are taking full advantage of the hardware installed on your server, which also allows Alike to offer optimal performance.

How Alike Performs on a Server OS vs. a Desktop OS

A popular request for our tech support team is how to tune Alike for the highest performance and scalability that the customer’s environment can handle. More often than not, customers experiencing performance issues are also running the Alike server on a desktop OS.

You may be wondering why running Alike on a desktop OS would cause any problems, especially since the Alike server itself doesn’t do much work (the remote backup “agents,” ABD and Q-Hybrid, do all the processing). While this is true, installing Alike on a server grade OS is still preferable in most cases, and often necessary in medium to large environments.

…installing Alike on a Windows Desktop is like putting a jet engine in a go-kart.”

Look at it this way: installing Alike on a Windows Desktop is like putting a jet engine in a go-kart. People have done it (no really, they have—check out this guy’s rig), but while this design will let you go 60 mph in a go-kart, you will only get so far before the kart falls apart trying to keep up with a Boeing engine.

A more apropos way to think about this is to look at some of the limitations Microsoft has placed on its desktop operating systems. Understanding the key differences between a Windows server and a Windows desktop can help illustrate why—in most environments—you will see greater performance if you install Alike on a server OS.

Why Alike Performs Best on a Windows Server

Ultimately, it is best to use an actual server edition of Windows for your Alike installation because server editions are better equipped to handle the load of your backup, replication, and maintenance tasks. Desktop versions of Windows (XP, Vista, 7, 8, 10, etc) all have resource limits and constraints. Even more important to note is that using a local ADS on a Desktop OS can significantly affect performance.

Because it is possible to install Alike on a Windows desktop and can work for some situations, the potential issues will not be as obvious as other applications that first run an OS version check. These apps won’t install unless it’s the proper server version, and Microsoft created some services that are only permitted to run on the server OS (DNS, DHCP, Active Directory, PKI, etc.).

Alike’s datastore, or ADS, contains all the deduplicated backup data for your installation of Alike. The main requirement for your ADS is it must be available as a CIFS share. This share can reside on any CIFS compliant server, a NAS, or even local to the Alike Server itself. You also want to make sure the system can handle all your concurrent inbound requests from your jobs.

Often, using an external storage device, such as a NAS or dedicated storage server is a good way isolate the I/Os related to backup jobs, and free up resources for Alike’s data processing work. When possible, use ADS storage that supports a newer version of SMB. An ADS that supports SMB 3.0 or higher can improve the performance of Q-Hybrid backups in Xen, and all backups in Hyper-v (Q-Hybrid and Enhanced), as well as all data processing work the Alike server performs.

For all of the reasons above, you’ll get optimal performance if you run Alike on a Server OS. Whether you’re installing Alike DR or Alike Standard, a server OS can fully utilize the hardware’s capacity, whereas a desktop can only utilize a certain percentage. If you have further questions about installing or using Alike, visit our Knowledge Base, or contact us with any technical questions. 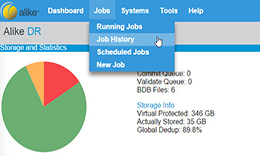 Learn how to quickly get up and running with the A2

I used Alike to migrate between Hypervisor server hosts. It was easy to switch between Citrix XenServer and Microsoft Hyper-V. Thanks for a great piece of software!