Quadric Software has always been a strong proponent of Citrix technologies, and since Citrix and Microsoft enjoy a long history of collaboration and complementary technologies, we have always considered Hyper-V an integral member of our technology family. With the release of 4.6 we put the spotlight on Hyper-V 2016, which now joins our family of supported Hyper-V releases.

Let’s start with why HV2016 is so special for backup, and it has everything to do with VM checkpoints. Historically, Microsoft has always offered a way to capture the current state of a VM’s disks via its VHD (or VHDX) chain. By adding to this chain, Microsoft can furnish a read-only view of the disk at an arbitrary point in time. Originally called snapshots, Microsoft wanted to avoid confusion with other technologies and renamed them to checkpoints.

The issue with checkpoints from the vantage of a Microsoft administrator is that they are only crash-consistent, meaning they represent the state of the disks when the checkpoint was taken, without prior synchronization with VSS components. Because VSS components prepare the OS and applications for backup, most Microsoft admins needed to complement checkpoint-based backups with other approaches, such as agent-based backups or VSS backups.

In Alike parlance, checkpoint backups are called Enhanced backups while VSS backups are called Q-Hybrid backups. This mirrors our technologies on the XenServer side, which provide the same features under the same names and empowers customers to protect heterogeneous infrastructures seamlessly. Q-Hybrid differs from Enhanced backups because Q-Hybrid accesses the guest VM directly and invokes VSS using Quadric’s proprietary dynamic agent. Alike customers trust Q-Hybrid backups to deliver application-consistent backups as needed, and they are comfortable choosing between Q-Hybrid and Enhanced based on their backups needs.

But with the introduction of Hyper-V 2016, Enhanced backups based on checkpoints become more appealing. HV2016 introduces “Production Checkpoint” technology, which integrates VSS backups into the checkpoint, ensuring that the VM’s file system and applications are in a consistent state at the time of backup. This means that HV admins now have a single approach for VM backup that covers all the bases, greatly simplifying backup deployment.

Things get better from there. Alike 4.6 adds our Changed Block Tracking (CBT) technology to Hyper-V Enhanced backups, dramatically shortening backup times. This innovation allows us to read only those blocks on disk that have changed since the last backup, thus saving a tremendous amount of time and I/O. In our tests, subsequent backup times decreased by several orders of magnitude. 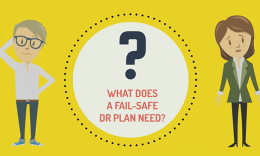 Watch our video on why Alike DR’s offsite vaulting could save your business after a disaster.

I use Alike DR in all my XenServer and Hyper-V production environments and, to date, it has never let me down, even when recovering against some particularly malicious viruses, such as Cryptolocker.